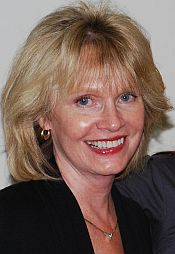 I am pleased to present the 2010 Nebraska Writing Project Carol MacDaniels Teacher of the Year Award to Dorothy Miller.
Dorothy Miller teaches English at Filmore County High School in Geneva, Nebraska. She’s been at Filmore County long enough to teach entire generations.  In fact, several of her nominators mentioned families of four or five that were her students.  Her principal acknowledges that she’s been a positive force during his entire term.  He writes:

I have worked at Geneva/Fillmore Central for the past fifteen years.  During that time, Dorothy has gone from teaching freshmen and junior English to teaching junior English and college bound AP senior English, AP Advanced composition, short story, film criticism, and creative writing.  To help improve our writing skills, I asked Dorothy to teach a freshmen writing exploratory a couple of years ago.  Fillmore Central has always been a strong writing and language arts school, but Dorothy has brought that level up a few notches.

I first met Dorothy in 1997 when Henderson hosted the first Rural Writing Institute.  This was the beginning of a professional and personal friendship that continues to this day.   Dorothy became a member of a book club that was formed by area teachers who had been participants in the writing institute.  She served with me on the NeWP Advisory Board for several years and we shared many experiences and conversations built around the work of the NeWP, rural teaching and writing, and the teaching of high school English. [Dorothy represented Nebraska at the first National Writing Project Rural Sites Network Resource Development Retreat. ] I know that the classes that Dorothy teaches in Geneva are first rate; she challenges her students through literature, writing, and the study of film.  She is an especially effective teacher of creative writing as evidenced by the number of her students who regularly are chosen for the Poetry of Place event each year.  In fact, it was Dorothy’s student who represented Nebraska in Washington D.C. for the first National Writing Project Rural Poetry of Place event several years ago.

As Sharon’s words suggest, Dorothy Miller exemplifies the traits our Teacher of the Year Award honors: the ability to inspire a love of writing in students, advocacy for the professional expertise of teachers, and a personal commitment to writing.  These three traits are, we believe, the solid core of the Nebraska Writing Project philosophy.  They were true of Carol MacDaniels, the visionary teacher in whose memory we give this award.  Carol, I believe, would have been especially pleased to know Dorothy is receiving this award, since the two worked together in that first Rural Institute in 1997.

Her students tell us just what an inspiring teacher of writing Dorothy Miller is.  One former student writes:

Imagination shined on stages, rested between crumpled pages, and matured through encouragement—at least for me.  Mrs. Miller inspired us to write from within—and because of her inspiration—I have found a passion for writing. I am honored to have been one of her students.

Mrs. Miller’s teaching has reached far beyond the walls of her classroom.  To this day, my husband (also one of Mrs. Miller’s former students) and I remember many of her definitions of vocabulary words.  When someone says “holy cow,” we’ll turn to each other and say “pius cow. “

Until Dorothy, the art of words was scary territory.  It’s been fifteen years since I sat in her classroom and cheered her punctuation cheers, echoed her lyrical mnemonic devices, and believed her when she insisted we could master composition, but I know them all still and teach them to my students.  Dorothy taught me to take refuge in writing, and it’s a lesson I am glad to have learned.

The second trait honored by this award is a record of sponsoring teacher professional development.  Dorothy Miller’s impact on the profession hasn’t been through union advocacy or inservice development, but through a steady stream of former students who are now teachers in their own right.  The current college teacher I quoted above is but one example.  Here’s what a parent of four of Dorothy’s students says:

My oldest daughter chose to become an English Language Arts teacher because of the impact Dorothy has made on her life. Perhaps one of the best indications of the outstanding teacher Dorothy is happened when my daughter was named Nebraska Student Teacher of the Year for English/Language Arts—the same year Dorothy was named Teacher of the Year. She doesn’t just teach students to pass but to excel and achieve!  My second daughter is working as a writing tutor in college and I believe this is a direct result of the excellent teachings of Dorothy while she was in high school composition class.

These words are echoed by several of the comments I received about Dorothy—in the four single spaces pages of support, at least five current teachers provided testimony.  Over the years, Dorothy Miller has nurtured a host of young people into our profession, bringing to teaching some of the best, brightest, and most talented.

Of course, the final trait honored by this award is being a writer yourself.  Key to the Nebraska Writing Project philosophy is the maxim “the best teachers of writing are writers themselves,” and Dorothy Miller definitely lives that maxim.  In fact, it’s as a writer that I personally know Dorothy best.  She and I exchanged writing during the 1997 Rural Institute, and a few years ago now, we wrote together for an entire semester during a Place Conscious Writing class. I’ve seen her name listed in FineLines magazine, which routinely publishes writing from our state and beyond.  In her writing, Dorothy seems drawn to interior reflection about family, the rural experience of the communities surrounding her, and her interest in tango. As I wrote to her in a class comment many years ago, Dorothy’s writer’s life shows “a lively intellect making the whole process of living in this place and time on earth full of resonance. “

I’d like to close by reading from a representative sample of Dorothy’s writing, a short note she sent me about the act of writing and what goes through her mind as she prepares for it.  I hope you all can hear is this excerpt what I hear: her openness, her desire to share across generations, and deep abiding love for education as an ongoing process full of hope, reverence.  and possibility:

My mother turns 85 this Thursday, and has been taking radiation treatments for several weeks.  She was a country school teacher at age 17, and I would like to get some kind of writing about her experience. It seems education has been the continuous thread in our lives and that is one angle I wish to explore. My son returned from Chicago over Labor Day with his new son to see my mother.  She lives in a small town of Shickley, pop. 370, and my son, his wife Ellen, and I went for a walk around town as my mother rested. He started to talk about his memories of Shickley, the importance of rural upbringing and values. As a new father, he is seeking the same for his son in Chicago.  It was so quiet in Shickley, sun, locusts, an occasional truck going by.  It does inspire one to think of possibilities for all kinds of writing and I have been journaling about possibilities.

Please join me in recognizing Dorothy Miller as the 2010 Nebraska Writing Project Carol MacDaniels Teacher of the Year.

The Nebraska Writing Project (NeWP) is a network of professional educators and affiliated writers that provides opportunities to improve, enhance and celebrate writing for classrooms and communities across Nebraska.